Breaking the Limits of Thought with Mauricio Franco 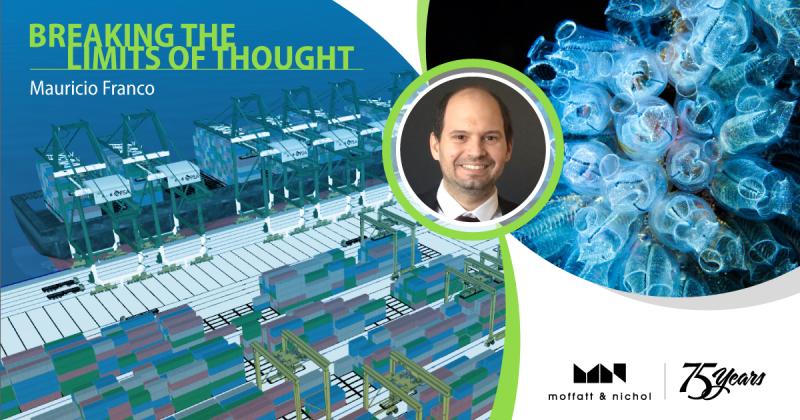 Our ability to evolve intellectually can guide problem-solving, as today’s business operations move into the future at an exponential pace.

Our universe began with a great, wild and chaotic explosion. Today, the planets still rotate, and the stars still burn thanks to the energy unleashed by that singular event, which took place 13.8 billion years ago. In the middle of all that chaos, an imperceptible, tiny, silent revolution began. Atoms organized into molecules, and molecules into cells, and cells into increasingly complex organisms.

The fundamental logistics of life consisted in capturing residual energy from the Big Bang to produce an improved, more efficient organism. The faster the organism improved, the greater its chances of survival in the changing environment. Life became a race for energy. When we burn apiece of coal, we are releasing, in a short instant, the energy produced by the sun that was slowly captured by the tree through photosynthesis. Whenever we savor a good piece of meat, in just one bite, we obtain the energy that the cow collected for several years, which it obtained from the pastures it grazed upon.

Approximately 600 million years ago, an organism managed to accumulate enough energy to develop a breakthrough that marked a fundamental milestone in our history: the brain.

In the book I of the Vortex, University of New York neuroscientist, Rodolfo Llinás, explains how sea squirt larvae developed swimming to search for better places to feed. To aid movement, sea squirts used a primitive neural network of 300 cells equipped with a light sensor and an accelerometer which helped them decide their next step.

The brain became the main tool of survival. Organisms accumulated energy to boost their information-processing capacity. In the end, the survivors weren’t those who adapted physically, but those who developed better mental models.

Our brain evolved until it had around 86 billion neurons, more than double that of a gorilla. Our brains need 400 daily calories to function, which equates to almost 20 percent of the food we consume. Despite its size and surprising complexity, it has limitations that we must learn to recognize.

The limits of the brain

The brain is a closed system, and only receives information through our limited senses. We live immersed in a mental bubble. As Shakespeare’s Hamlet said, “I could be bounded in a nutshell and count myself a king of infinite space.” Our judgment is skewed by our incapacity to sort true information from false, or to identify what information exists beyond what we are aware of. We link assumptions based on assumptions. That’s why, often, something that makes perfect sense in theoretical and intellectual discussions doesn’t work in practice.

There is also a cyclical connection between what we think and our emotional state. We think as we feel, and similarly, we feel as we think. Being conscious of our own emotional state and that of others is a key skill we need to develop to take unbiased decisions (check out the Cognitive Bias Codex: https://bigthink.com/mind-brain/cognitive-bias-codex).

Finally, many of the problems we endeavor to resolve exceed our brain computing power and understanding. Jaime García Serrano, a Colombian dubbed “the human supercomputer” holds six Guinness World Records and appeared in the History Channel’s superhumans series for  his ability to memorize a 200-digit number. In information terms, this is fewer than 200 bytes. If we find a problem larger than 200 bytes, even the brain of this genius would be incapable of processing it.

Due to these limitations, we tend to cast premature judgements that may impact lives and businesses, sometimes costing millions of dollars and a lot of time to recover. The problems businesses face today are not only larger than 200 bytes but way more complex.

Tools for the brain

Hoping to break the limits of the human mind, large tech companies such as Google and IBM are racing to develop quantum computers capable of processing in three minutes what a traditional super-computer would process in 10,000 years. In September 2019, Google confirmed that it had succeeded in building the first quantum computer of 54 qubits and named Sycamore. Alternately, Intel announced the construction of an artificial intelligence CPU named Pohoiki Beach, capable of simulating 8 million neurons.

However, to get smarter, it is not only about increasing brainpower. You also need the right people, the right tools and the right experience.

At Moffatt & Nichol we developed FlexTerm, a flexible and open platform that allow us to build a digital replica of a company, capturing and reproducing in full detail all the relevant aspects of a business such as diversity, randomness, unexpected events and complex business rules and logic. With the digital model we can run a company’s operations even before it is designed, allowing us to optimize infrastructure right from the start. We can run simulations to evaluate what-if scenarios and achieve savings on capital and operational expenses. The digital model can also be connected to the production control systems to optimize the algorithms and automation logic of the control software in a safe test environment.

FlexTerm allows us to solve complex business problems by integrating the best of each world: artificial intelligence, computing power, and practical human experience.