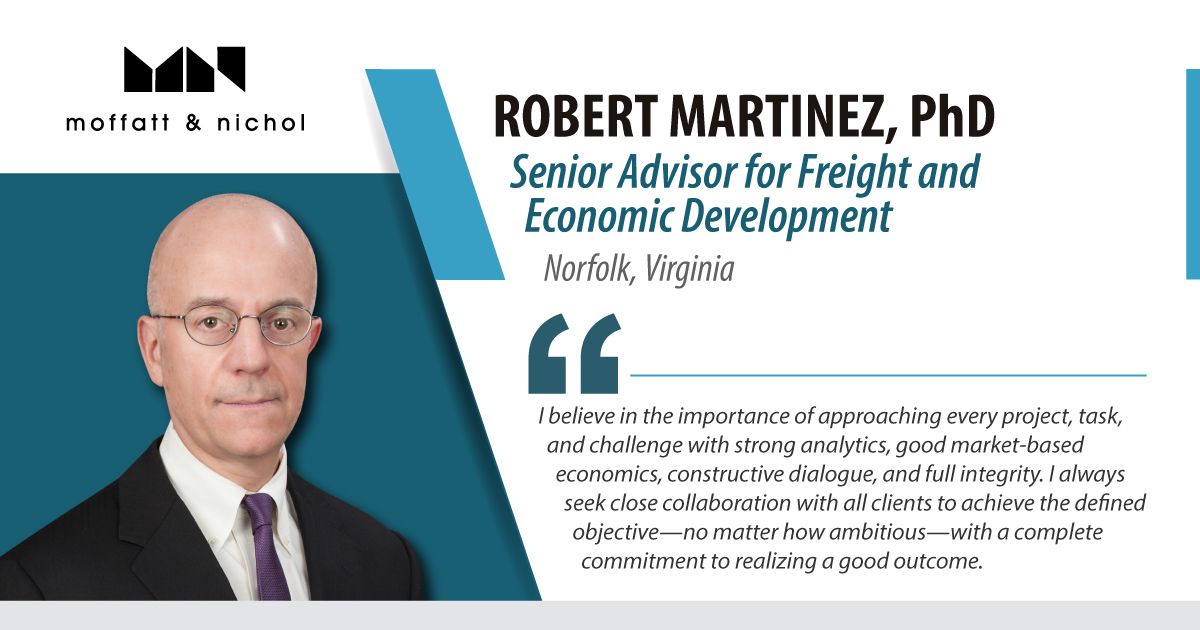 Moffatt & Nichol is pleased to announce that Robert Martinez has joined the company in the role of senior advisor for freight and economic development, expanding the firm’s consultancy capabilities in the transportation sector.

“We are excited that Rob has joined the Moffatt & Nichol team,” said Moffatt & Nichol President and Chief Executive Officer Eric Nichol. “Rob brings a wealth of experience and expertise, both from his years in public service and in private industry. We hope to apply his expertise and broad perspective in the service of our clients, which will be particularly valuable considering the rapid evolution we’ve seen in the goods movement sector in recent years.”

After almost a decade in public service, Rob went on to a 24-year career in private industry with Norfolk Southern Corporation, one of America’s premier railroads, as vice president for business development and real estate. During his tenure with Norfolk Southern, Rob was responsible for the oversight of multiple infrastructure and economic development projects and served as a principal lead on public-private infrastructure projects, including the Heartland Corridor, a landmark, multistate rail infrastructure capacity project; the Upstate Express Corridor in South Carolina; the Alabama USA Corridor; and numerous industrial, manufacturing, and supply chain investments in the United States. He worked extensively on several intermodal projects and headed the company’s Mexico team.

After graduating from Columbia University, Rob attended Yale, where he completed his doctorate, studying economics and political science.